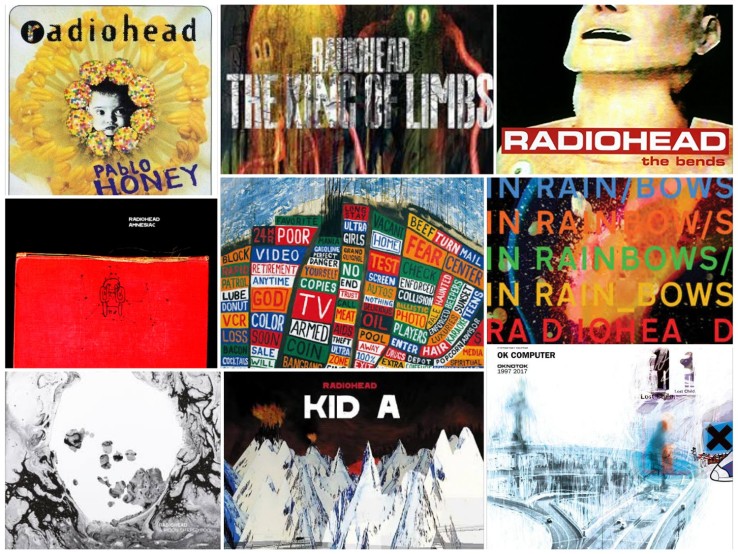 “Hey, here’s the new Radiohead album”, a friend offered few months ago. I put it on, listened. So this is how they sound now. Interesting, I thought. But theirs is not the kind of music that I need. At least for now. Some people find meaning in lyrics that reflects the despairing things happening around the world. I already had enough of that—not from music, but from other things.

I need music to unwind, to unplugged myself from the system—by plugging in to another. I listen to songs that could remind me of things that “brighten up the corners“, not songs that reminds me of the opposite.

What is this called? Neo-classical-rock? Wikipedia says it’s considered art-rock. Art-rock, but not as in Mellon Collie and Infinite Sadness‘ prog-meets-jazz-meets-metal-meets-grunge art-rock. It’s just old Radiohead cut in half, then half of them replaced with strings, orchestrations and whatever. Which can also be said of their other albums starting with Hail to the Thief. Hail to the Thief is half electronic, half guitars; In Rainbows is half made with laptop, half made with live musical instrument; TKOL is half old Radiohead, half beats.

And no, I’m not trashing their newer albums in favor of the old ones. Unlike with Foo Fighters, I just cannot dismiss the last three albums just because I didn’t like them. Radiohead is one of my favorite bands too, and “interesting” is probably the worst I could say of their last two or three releases. And this isn’t rare—that I like OK Computer but not In Rainbows or The King Of Limbs. Some people I know started liking the band with In Rainbows and finds anything before it inaccessible. Some even went as far as saying that Pablo Honey is the only decent Radiohead album, that all the rest reeks of arena-rock grandiosity.

So how would I rank all of Radiohead’s LP’s? Which one’s the best? I can’t rank all of them. I haven’t really listened to their last two albums. But from those that I have listened to, I’d pick my top five. Here it is.

OK Computer
1997. We were so into rock music. And  bands. Green Day, Blur, The Smashing Pumpkins, our semi-charmed kind of life. Radiohead’s OK Computer descended upon us in the form of a cassette. And a news article on a broadsheet proclaiming “Radiohead returns to save the universe” on its headline. The tape was passed from one to another, never returned to its original owner. I spent a week playing it in the old radio cassette player. I never heard anything like it before or since (until Hail to the Thief). Then it disappeared. Like a dream. Never saw that tape again. Never knew who it ended up with. But the music haunted me in my wakeful dreams.

The Bends
“High and Dry” and “Fake Plastic Trees” are my most favorite Radiohead songs. They’re the equivalent of “In My Life” and “Here, There, and Everywhere” by the Beatles. To me, at least. They were my favorites even before OK Computer; even before I recognized that the song played in Romeo+Juliet’s closing credits was “Exit Music (For A Film)”. This album also got them riffs (i.e., Just, The Bends), more than Jonny Greenwood’s chugging guitars right before the chorus of “Creep” (the part which Parokya Ni Edgar replaces with “coughs” in the parody “Trip”).

Hail to the Thief
2005. This is the very first Radiohead album I owned. And this is the album that introduced me to Radiohead’s electronic-rock. It’s the post-90s album of theirs I found easiest to like. And it sounds like a direct follow-up to both OK Computer and Kid A / Amnesiac. This would be the last time a Radiohead album would grab me right on the first track. It leaves a lasting impression too: of dread, hopelessness and gloom, a wolf at the door. It’s probably the last true physical rock record I bought before the internet totally took over the music industry, or whatever’s left of it.

Kid A / Amnesiac
This would make five a six. Whether they should be counted separately or… Yeah, I’m just lazy, that is. But yeah, they’re twin albums, a year apart. Just like The Strokes’ Is This It? and Room for Squares, just like tide/edit’s Lighfoot and Foreign Languages. It’s electronic-rock, like Radiohead trying to be DJ Shadow or Aphex Twins. Kid A plays like one big song, without much peaks and troughs—it’s very consistent. Amnesiac is a little less. But with the highlights (Pyramid Song, Knives Out, You and Whose Army?, I Might be Wrong) reaching higher highs than those in the first.

Pablo Honey
1998. Pablo Honey, or the tape I borrowed from someone who also borrowed it from someone and never returned. I wanted to listen to The Bends, while “No Surprises” haunted my dreams. But there I was, stuck with the album that houses that well-worn hit “Creep”. It has a few hidden gems (Prove Yourself, I Can’t). Then I remember Rico Blanco, in the middle of one of their songs, singing a few lines from “Stop Whispering” (And the thin man said I don’t wanna hear your voice) in one Rivermaya gig in Saguijo. And it was such a spiritual experience, being one of the few souls in that specific moment, who knew the words he’s singing and from what song they’re taken.

Picture of the floppy from feelnumb.com.