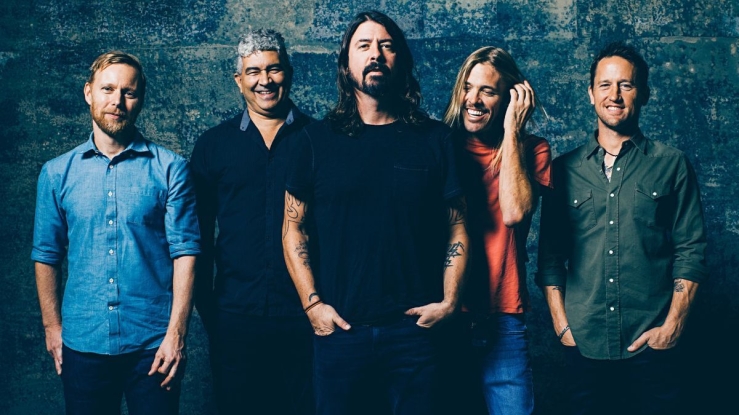 The Foo Fighters, Dave Grohl’s solo studio project that quickly evolve into a full band, are now well on their way to becoming a “classic rock” band. More than two decades old and they’re still at it. For better or worse. They are like the granddaddies of corporate rock now—irrelevant and boring—in the same way Van Halen and Aerosmith were during the nineties. But that’s not to say the Foos never had excellent albums. They had a few. And before you start typing a hundred word vomit in defense of your favorite rock band, hear this: they’re my favorite band too. Or at least they used to be on my top five. Until they eventually slipped, around the time they released another album produced by Gil Norton, around the same time their concerts got bigger and bigger, while their songs started to sound more and more like lesser variations of their older hits.

One by One (2002)
The band’s least favorite album is also their worst. That makes sense. Over-produced, formulaic, and over-compressed—while arguably not their weakest set of songs—One by One is easily their worst sounding record. Tellingly, the best song from the album is the raw acoustic version of “Times Like These”, which can’t be found on the actual album.
Notable Tracks: All My Life, Have It All

Sonic Highways (2014)
You can resort to all sorts of gimmicks—TV documentaries, record your songs in different cities, invite your idols—or you can write your best damn songs and never worry much about the extraneous stuff. None of the eight tracks here are downright bad, none half-assed. If anything, they’re more likely to be full-assed or over-assed (i.e., one song features three guitarists plus the guy from Cheap Trick). But none of which are better than the last Foo song I could say I truly liked: “Resolve” from In Your Honor. On a positive note, at least Foo Fighters avoided embarrassing themselves by releasing an album two or three tracks longer than an EP, instead of putting out a double or triple album with only one average album worth of material—something Green Day did not long ago.
Notable Tracks: In The Clear, Subterranean 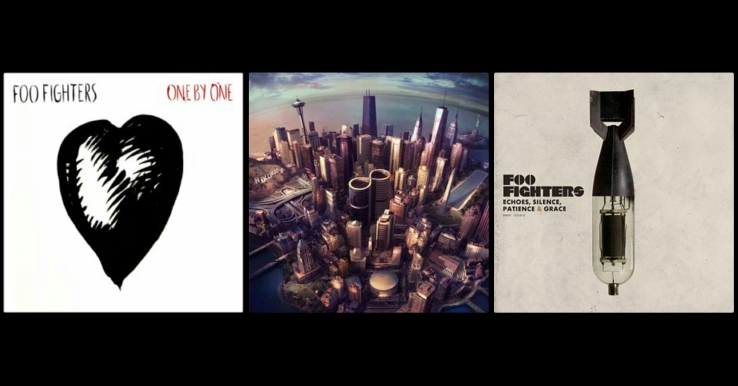 Echoes, Silence, Patience & Grace (2007)
Though the first single “The Pretender” was kind of a warning, that this album might not be any better than the last, there was also a faint sign of hope in it, that perhaps this album could be at least as good. The song starts off quietly takes its time before the band goes full blast, with Dave Grohl screaming on top of his lungs. That glimpse of hope quickly dissolved with the release of “Long Road To Ruin”, along with its unfunny music video. Foo Fighters were known for their funny and witty—sometimes clever—music videos, unfortunately, “Long Road To Ruins” isn’t one of them. It’s not even as good as “The One” (off Orange County OST). The best thing about this record isn’t Gil Norton returning on board sitting on the producer’s chair—it’s the album cover.
Notable Tracks: The Pretender, Statues, Home

Wasting Light (2011)
At this point, it’s hard not to recognize a Dave Grohl song if you hear one. Even if it’s a song played at the end credits of a superhero movie. You know, those OST slots used to be reserved for acts like Nickelback. That Bob Mould (Husker Du) sang a few lines in this record and ex-Guns N’ Roses bassist Krist Novoselic played a few notes, makes this LP a bit more interesting than the previous ones on this list. There’s probably a noticeable difference too, between the sound here and their other albums, since Wasting Light was recorded in the garage using tape and analog technology. Especially, if your going to compare it with One By One. But this isn’t Pavement, Beck, or Radiohead. So you’d be mistaken to expect that this bunch of rockers and soft-rockers would sound any more different than the ones in the previous LP.
Notable Tracks:Walk, Bridge Burning, Back & Forth, Arlandria

Skin & Bones (2006)
This isn’t MTV Unplugged in New York. Not even close. The intimacy, the unpredictable raw energy, the surprise covers are all missing. There is no revelation of a sensitive side of a band known for their abrasively loud rock songs. In short, there’s nothing here that we didn’t already get from their earlier albums—from Big Me, to Doll, to Miracle. A cover of The Zombies’ “This Will Be Our Year” would have been lovely. Still, it’s nice that “Marigold” finally found its way into a Foo Fighters album. Plus, the alternate live versions of “My Hero”, “Best Of You” and “Everlong” are all worth checking out.

Foo Fighters (1995)
Before Dave recruited ex-Nirvana Pat Smear and half of Sunny Day Real State, he recorded what would be Foo Fighters’ debut album. He played drums, guitars and sung on all of it. It’s like his solo album really, which is why almost half the songs, executed loud fast and grungy, have very little variations in them. The best thing about them is that they’re consistent.
Best Tracks: I’ll Stick Around, This Is A Call, Big Me, For All the Cows 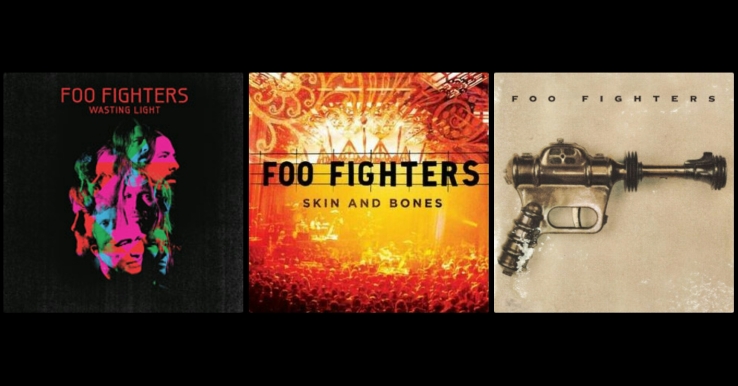 In Your Honor (2005)
I remember Grohl calling this twenty track-double album on a press release on their website, as Foo Fighters’ Physical Graffiti. If you’re a casual rock fan who thinks that Led Zeppelin’s double album is an indulgent affair marred by weak numbers, then Grohl’s description is just apt. But if you’re a Zephead who thinks that said double LP is the pinnacle of Zepheadism (yeah, there is such a thing), then Grohl’s shameless self promotion is downright farcical and ridiculous. Not because you know Grohl was half-joking then, but because Grohl is also a Zephead like you.

While In Your Honor‘s unique packaging is what attracts extra attention, it is also its own undoing. Yes, there are more than a few beautiful acoustic numbers in all the quieter stuff lumped together on the second disc: “Miracle”, “What If I Do?”, that duet with Norah Jones. And yes, the second disc really shines in contrast to the “rock” disc—a soft strummed departure from the band’s usual programming. But the thing is, it leaves the first disc, with all the loud and hard rockers, sound like a mix-tape made by someone who really hates the band’s softer side, someone who didn’t like the Menthos joke in “Big Me” or the mushiness in the Veruca Salt-inspired “Everlong”.

The biggest bummer here, however, is that, this could have easily been a fourteen-to-sixteen-track, single disc record, with songs sequenced like in their previous LP’s, alternating between the hard, soft and the in-between. Grohl should have known better than oversimplifying and classifying his songs into either soft or loud. You can’t really put your songs into two labeled boxes and expect them to work together—the soft highlighting the loud, the slow underlining the fast ones—especially when there are songs such as “Resolve” and “Up In Arms”, that wouldn’t neatly fit into either of those. Still, this is one of the band’s better albums.
Best Tracks: DOA, Resolve, Best Of You, Miracle, What If I Do?, Virginia Moon

But once the songs got me in their own groove (the pounding opener “Stacked Actors” or Dave Grohl screaming like three year old on the frantic “Breakout”) and when that hilarious “Learn to Fly” music video started airing on MTV, I realized that it’s a worthy follow-up. A more relaxed, more laid back sequel that favors a kind of retro-ish vibe (i.e., “Gimme Stitches”, “Headwires”, and the talk-box trick in “Generator”), in as much as the usual yell-over-loud-distorted-guitars that fans already loved. Not to mention, two of the loveliest ballads Grohl has ever written are here—the magically sublime “Aurora” and “Ain’t It the Life”.

Grohl once mentioned that this, an album he recorded in his own basement with Nate and Taylor, is his favorite Foo Fighters record. It’s definitely one of their best, though it’s also possible Grohl was just being nostalgic at the time, for those months they just let the good times roll. No pressure from a record label, no deadlines, no pressure to match the success of the previous record; just letting the good times, the beer and barbecues, seep into the songs.
Best Tracks: Breakout, Ain’t It The Life, Aurora, Next Year, Generator, Learn To Fly, Stacked Actors 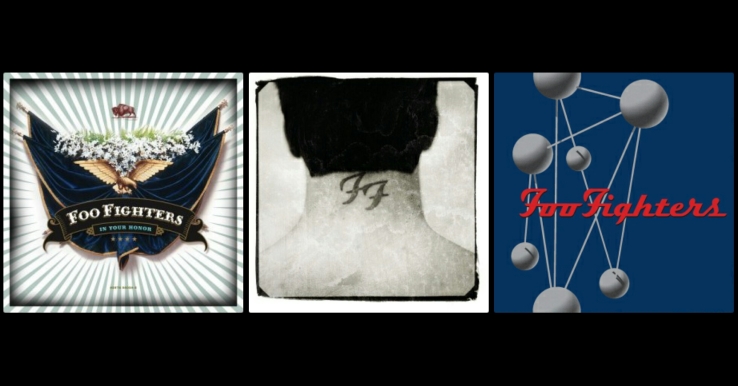 There’s the post-breakup catharsis of “Monkey Wrench”, angry rant on “Wind Up”, the inspirational “My Hero”, pogo starter “Enough Space” and the loud-quiet-loud staple, “Hey, Johnny Park!”, which would have been a classic by now, had it been released as a single in ‘97. For the quiet and tender, there’s the ultra-mushy “Everlong”, the first half of “Up In Arms”, jangly opener “Doll”, the X-Files-utilized “Walking After You”, and “February Stars”, which features the album’s loudest whispers. Needless to say, The Colour and the Shape is chock-full of post-grunge goodies that come in big radio-ready packages – some of which would become Foo Fighters’ biggest hits. This is post-grunge at its finest.

While I’m more inclined now to revisit the No.2 album more often than this, there’s just no excuse not to check this one first if you’re just starting to get into the band. No, don’t get the latest one, even if you think it’s the loudest rock song you’ve heard in the last five years. You go straight to this one. Then, you go to No. 2, then In Your Honor, and so on and so on.

Images from here, there and…

1 thought on “Foo Fighters’ Albums, Ranked From Worst to Best”