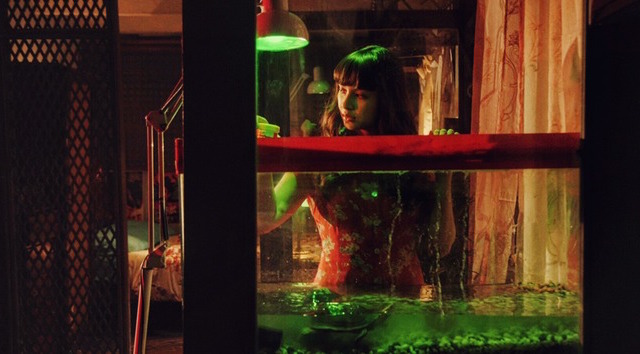 Some said this movie accurately portrays the young people of today—perpetually bored, alone and lonely. Connected but not really. Spotify music plus TV soap as background noise, equals loneliness.

The movie’s nice to look at. As someone puts it, it’s so Instagrammable. It has style (i.e., the movie’s aspect ratio changes every time Jewel feels the “urge”) but it’s mainly Ryza Cenon, who carries the whole movie on her shoulders and digital bat-wings, that kept me from shutting off my eyes. Yes, the few CGI and Ryza Cenon makes this, somehow, worth the ticket price. There’s the much talked about “daring” scene. And there’s a wonderful scene in which she cosplays as a manananggal for their Halloween party. Bitter irony.

The subplot connecting the killings to Duterte’s drug war is nothing but opportunistic. Vangie Labalan is miscast to play the lola in a movie where she’s the only character who feels alive. Well, the aswang is basically ageless, probably a hundred years old. So, she’s basically dead. Or undead. And only an undead could fall for the undead. Undead, as in character-wise, the male lead’s a walking dead.

And where does Jewel get all those money? What does she do to pay her rent, buy clothes, food, makeup? From her victims perhaps?

Then, there’s also guilt. Guilt after having a night of partying that ends with casual sex. And murder. There’s also some mysterious vial with magical liquid potion Jewel uses when she feels the urge to eat goto–uncooked human goto. But it’s never really explained. Does she use it to prevent the vagina-like orifice on her back from opening so that her wings won’t come out?

Ang Manananggal Sa Unit 23B is like a long music video, with snippets of story inserted in between. A story about two people in love. It makes for an interesting music video that has sex, night club scenes, scary and gory death scenes, but the movie’s plot gets in the way. And it only comes alive in the end. When love is finally certain and in the air.

This reminds of an old manananggal joke my uncle once told me: the one advantage of having a manananggal for a girlfriend, is that you could travel fast and for free.