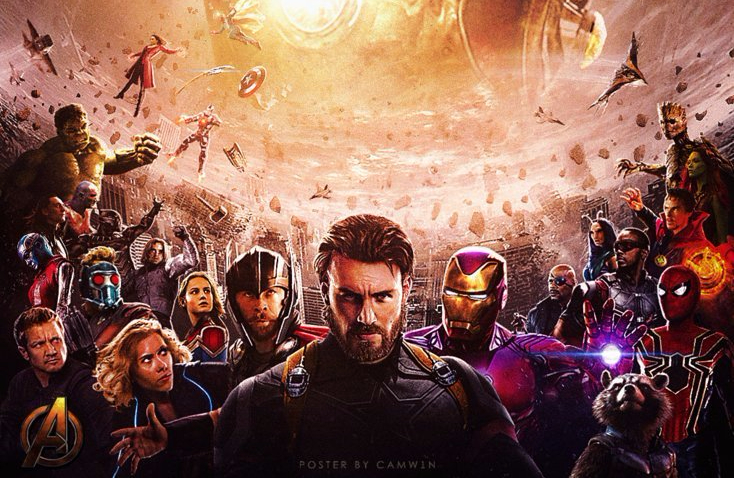 Can’t say I’m not the least bit excited about Avengers: Infinity War. It is after all an Avengers movie. Something I have always looked forward to more than any other series or sub-franchise in the ongoing Marvel universe. Outside of the Guardians of the Galaxy, of course.

One reason I’m not too excited about Infinity War is that the Russos are directing it. And the writers of Captain America trilogy are the guys behind the script (Edit: They also wrote The Dark World, which I actually liked, but y’know Joss Whedon also had a hand on it). Sure, Civil War had some funny, sometimes witty back and forths, but it’s not the same as when Joss Whedon was still Marvel’s go to guy. Of course, Age of Ultron was a massive let down but so was Civil War.

At their best, the script for the last two Captain America movies, were just a little more than serviceable. Except for The Winter Soldier‘s bone-busting, fast-cut ADHD-style and a little shaky fight sequences (not really that good, if you ask me, since they tend to get repetitive in the long run), and Civil War‘s airport scuffle, those movies didn’t really stand out from the rest of the MCU. They didn’t have a distinct look or tone. Neither the triumphantly comedic/dramatic as the Guardians, nor as outrageously “out-there” as Thor: Ragnarok, and never as heartfelt as Ant-Man. Nothing really inventive or out-of-the-box.

Speaking of out-of-the-box ideas, that scene in where Loki was falling thru nothingness for thirty minutes is one of the most inventive sequence I’ve seen among recent MCU films. Sure that sequence is simple on the surface, not much CGI required to pull off, but it definitely required more than a bit of imagination to come up with. Yes, it was played for laughs and didn’t really forward the plot but it’s actually great in that, it demonstrated Strange’s power, his magic, it fleshed out the contrast between characters Loki and Doctor Strange, and also, it was very funny. My complaint with Doctor Strange is that it wasn’t magical enough, it wasn’t really strange. (Should Waititi take on next Doctor Strange movie, I would be excited for that.)

Going back to Cap’s movies, on pure technical aspects, they’re as exciting as Ant-Man. Outside of things mentioned above, they look so run-of-the-mill. Too bad for them, Ant-Man had a smaller but more relatable, not to mention more convincing, story to tell.

So yeah, the trailer is out. And it was different from the one shown in D23, which already leaked thru the internet. Trailer breakdowns are everywhere. This guy found 13 reasons to be so excited about this movie coming out next year. So I decided that I’d rip him off and give my own—kind of contrarian—take on the list. Here we go:

Vision Goes Through Changes
Not a big fan of Vision. Though I like Age Of Ultron more than the next guy, Vision’s origin is one of those sub-plot in that movie that left me… I don’t know. It’s was kind of magical and dumb and also very contrived. I like Scarlet Witch. There’s a part in Ultron where Hawkeye told her that none of these (the things happening in the movie) makes sense, and it was followed by her character transformation. I also like her being paired with Vision in Civil War. But that brings me to one of my biggest gripes about the movie: Where the hell is Vision during that Lagos mission?

Anyways, the trailer shows Vision in human form which tells me that there’s probably something going on between him and Wanda in Infinity. That something will happen between them but we’ll not be able to witness it because they have to do it off screen. And that means Vision will have to grow himself a man-dick. (He made his own cape, remember? Or, more like, it grew out of him.) He needs a really good android equivalent of the human penis. The same way Ego did.

Banner Is Back On Earth
Honestly, after I saw Thor: Ragnarok, I hoped he’d just stay there in Sakaar or some other alien planet. With Thor, of course. And Korg. And Valkyrie. Loki? The Revengers? The Other Space Avengers? (Or is it The Other Dimension Avengers?) Yes, I’m OK with that as long as Waititi’s on board.

New Team-Ups
Exactly what’s new and so exciting with that? Iron Man has teamed up with Rhodey as early as MCU’s third movie.

Loki And The Tesseract
Loki seems to be offering the green cube to someone, either Thanos or one of his children—finally, after five long Earth years (and who knows how many MCU years) since the first Avengers. Mad Titan Thanos must be very titanically mad at this point. The question is: Is Loki of any use to him after he gets what he wants? Most likely not and he’s gonna dispose him off as quickly as possible. But Loki can always fake his own death, right? Hmm.

Enter Thanos
If you think the MCU kind of sucks, it is Thanos’ fault. It’s his fault some movies are heavily built on these McGuffins, that the MCU is plagued with boring villains because he’s the “Big Bad”, because the MCU needs to make 19 movies before he’s finally “in” the movie. Which is to say, we had to suffer a slew of unmemorable villains before the real Big Bad comes out. All I’m saying is, this movie should be worth all the trouble and the wait. To quote Tom Hanks’ famous last words in Saving Private Ryan, this movie should: Earn it. And prove that those villains that came before him: Red Skull, Whiplash, Malekith, Ultron, that Doctor Strange villain who’s not Dormammu, and Scott Adkins didn’t die for nothing. That they didn’t die just to make way a perfectly fine movie. Because at this point, Perfectly Fine ain’t just Enough.

Spider-Man’s New Suit
I thought Homecoming was about ‘I’m not nothing without the suit’. What happens to Peter’s genius then when Stark keeps supplying him the goods? It looks like they’re setting Peter up for future movies. Iron Spider? Sure. Are they going to have Peter take over Tony’s mantle in the next installations? And let Miles Morales take over Peter’s? Holy Genius Marvel! But this is what most Marvel movies have always been: elaborate set-ups for future projects. Of the 17 movies they’ve already released, how many of them felt like genuine stand alone movies? Almost 20 movies in and they’re still opening loops instead of closing them. On the other hand, maybe Thanos will destroy Spidey’s armor. Then Peter will have to use his other suit, the hi-tech underoos, which would be ruined by some “black goo” from other dimensions during Avengers 4 (aka Secret Wars). Then, voila, Black dancing Spidey all over again!

Hulkbuster Iron Man Is Back
We’ve seen Hulk fight the Hulkbuster in Age of Ultron. And I wasn’t really thrilled. That sequence was more exhausting than fun to watch. I want something that makes you care about the characters, the outcome, and no matter how serious it should still be fun. Like Kick-Ass‘s fight sequence near the end for example. Or the bank robbery sequence in Spider-Man 2. Though it was still a bit fun (mainly because of Downey Jr.’s banter-heavy fighting technique, and well, he’s slugging it out with no other than the strongest Avenger), there was a also dragging seriousness to it. It was a little bit pointless in that it only repeated the Hulk-destroying-the-team ploy of the first movie. And it pulls the focus of story to wholly different direction (to show that peoples and governments started thinking the Avengers are dangerous) mainly because it’s a set up for another movie: the forthcoming Civil War.

Just how powerful Thanos is? Could the Hulkbuster do him any harm? Or more importantly, will he have some “what the fuck” moment the same way Ronan did in GotG? Remember that part of the movie? Groot just died saving his friends. Then Ronan was about to kill them all with his war-hammer. Then out of nowhere comes Quill dancing in front of him and the look on Ronan’s face was priceless—no, it was precious(!) more powerful than the Infinity Stone embedded in his hammer. And it’s followed by that kick-ass dramatic sequence that ends with “You said it yourself bitch, we’re the Guardians of the Galaxy!” That’s the kind of sequence I’m seriously hoping for. A rollercoaster ride of emotions. And Infinity War should pull off something like that, even if only remotely as good. Because Ronan is no greater than Thanos. Because this is the movie with the Big Bad we’re talking about. It should be nothing less than Epic.

Thanos Vs. Spider-Man/Thanos Vs. Vision/Thanos Vs. Iron Man/Lots Of Fighting
I kind of feel like Infinity War will set the record for the most number of punches thrown in an MCU movie, if not in all action movies ever. I’m calling Guinness now. So they can create a new category: Punchiest Movie of All Time. And maybe they should start counting now. And if we are to compare different superhero/comic book movies and franchises, it’s safe to assume the MCU is way ahead of the competition. Which is kind of tiring if you think about it. Could the fights be more playful? Or have more focus perhaps? And not a hundred dozen things all happening at the same time?

Avengers Assembled
The Avengers arguing among themselves with the Mind Stone in the middle, in the first movie and the Mjolnir-lifting contest and later, Ultron’s dramatic entrance in the second, is the heart and mouth of those two Avengers movies (Also, Cap and Iron-Man’s “Language!” banter which HISHE used as a punchline in at least two of their videos.) Will we get something as memorable from the Russo Brothers’ next two movies? I really hope we’ll do.

Guardians Of The Galaxy Assemble Too
The cast of GotG should remain in character, which means, they get to be the A-holes that they are, regardless of the script. I mean, they could just improvise the way the Revengers in Ragnarok did. And if they do, and if they take at least four-tenths of this movie’s running time, I’m sure I’m in for a treat. But that’s quite unlikely since there are three separate teams and locations (at least for now) based on the trailer.

*Bonus* Captain America’s Got A Beard
Facial hair’s a big deal nowadays. Just ask the guys behind Justice League. Also, that beard looks good on Cap. And based on the trailer, I think it’s 100% real, not a speck of CGI on Cap’s face. That’s a big plus. Now seriously, I hope that by the end of Avengers 4, whether Cap’s gonna die in it or not, they’d give him a really good reason to shave, something along the lines of Jude Law’s Civil War deserter W.P. Inman’s reason in Cold Mountain.

But shave or no shave, CGI or real, I have to say this: Please Marvel, if Cap’s gonna go down in Avengers 4, please don’t let him die a virgin. Because if that happens—now THAT would be really, really, really devastating.

9 thoughts on “13 Reasons Why I’m (Not) So Excited About Avengers: Infinity War”