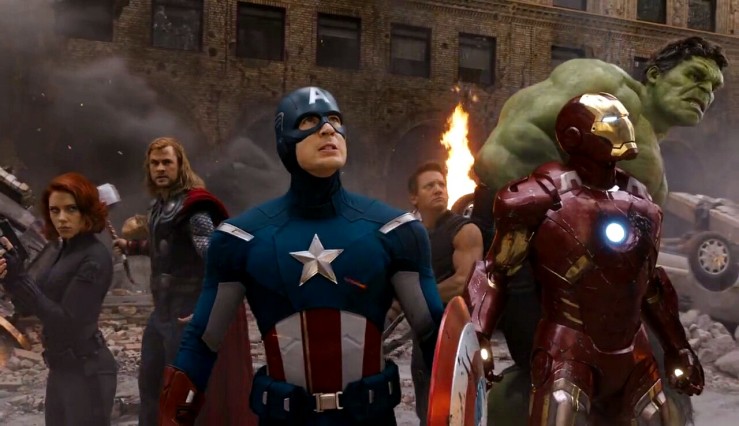 The Avengers (2012). The cataclysmic results of Loki’s entrance in a S.H.I.E.L.D. base was somewhat off-putting, sort of Michael Bay-like, but the movie regains my trust the moment Black Widow and Bruce Banner show up. At the start, Steve Rogers has nothing for Tony Stark but contempt, for Nick Fury and SHIELD, distrust. Bruce Banner isn’t comfortable within a military organizations like SHIELD but tries to help them anyway. Despite that, he’s in full control of his rage—except with Loki’s scepter in close proximity. The scepter is neatly situated at the center and surrounded by the would-be Avengers, pitting the superheroes against each other, amplifying their egos, fears, dividing them before they could even be called a team.

This is what The Avengers is all about: the set up, two-thirds of the movie is a set up. Every narrative strand builds up to a massive climax: out heroes learning to work together and the gigantic mayhem in Manhattan. Rogers clearly dislikes Tony’s style, but soon realized the guy has enough reasons to show off because Stark’s technology is just awesome. He’s an asshole, sure, but he’s the kind of asshole Cap needs on his side. Black Widow gets to save his pal Hawkeye from Loki’s spell, but not before she witnesses first-hand the monstrous Mr. Hyde hiding beneath Banner’s Dr. Jekyll. Thor, of course, like in his first movie, has to figure out if he’s really worthy. And I guess it’s all there really is with Thor in terms of character arc. And Banner/Hulk, well, has probably the most iconic punch-line in the whole movie: “I’m always angry.”

Then comes the most perfectly orchestrated massive superhero fight of all superhero movies. Think of it as Zack Snyder meets Michael Bay city destruction, actually kind of off-putting, if only it isn’t done way way better. Why? Because Joss Whedon knows how to vary multiply divide, shoot and compose iconic, massive, but coherent action scenes. He makes demi-gods bleed and face failure, flesh out their human side instead of the super. He never forgets the audience, the ordinary people caught between the forces fighting. He knows when to throw a punchline, knows when to punch. And most importantly, he knows when to SMASH!