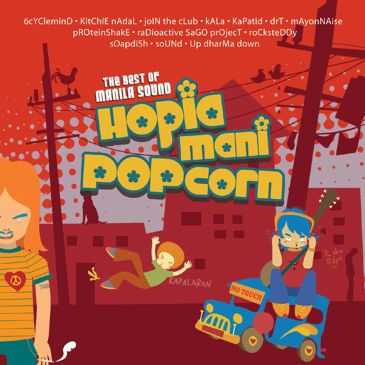 Bagong Banda… Awit Ni Sampaguita | Various Artists | 2008
Either you’re a curious Sampaguita fan or you just want to get that rare Sugar Hiccup or Session Road track that isn’t on any of their albums. This is for completists only. Covering Sampaguita is like doing The Beatles, except you don’t have tons of songs to choose from. You either get lucky in the lottery or try your very best not to fail. Most of these bands bungled it, with Paramita’s “Bongahan” probably the biggest dud. Little known band Lokal does a decent take on minor hit “Mahilig”. You could say Sugar Hiccup and Paraluman just got lucky “Tao” and “Ikaw Pa Rin” got assigned to them. Session Road, not so much. But thanks to Hannah Romawac, their cover of “Nosi Balasi” doesn’t suck. C

Hopia Mani Popcorn | Various Artists |2006
Not every artist could cover a Rico J. Puno hit and get away with it like Lourd De Veyra and Radioactive Sago did—the murderously drunk funny videoke sing-along “Kapalaran”. Didn’t like Kitchie Nadal’s “TL Ako Sa’Yo” when this came out. It actually sounds a LOT better now. Maybe it was ahead of its time. DRT’s hard-rock version of “Tao” is better than Sugar Hiccup’s version on that other tribute album. And props to Kapatid for shining a light on another classic (“Hanggang Magdamag”) and the usually forgotten funk bands of the ’70s (The Advisors, Soul Jugglers). I could do without Rocksteddy (“No Touch”), 6cyclemind (“Bonggahan”), Protein Shake (“Macho Gwapito”), and Sound’s soulless attempt at Rey Valera’s “Ako Si Superman”. Mayonnaise and Join the Club? They’re just OK. Soapdish’ sped-up version of Rey Valera/Rico J. Puno/Sharon Cuneta classic? Not bad. Up Dharma Down’s “Bitin Sa’Yo” is a miss. Medyo bitin. B+

RSP artwork from this site.