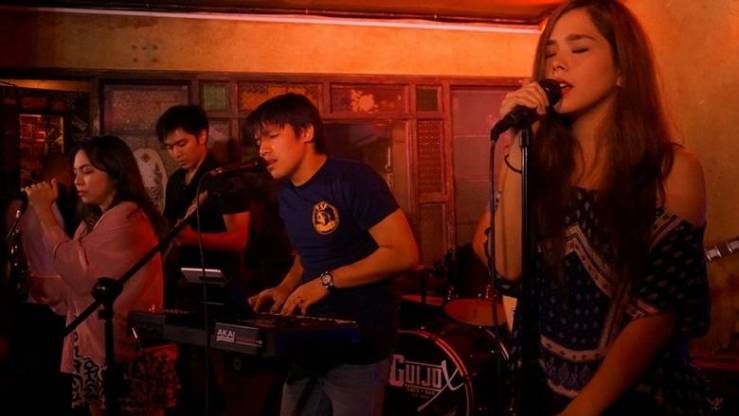 Cheats | Cheats | 2015
Keyboards and female vocal harmonies to enliven old guitar pop/rock; grunge repurposed as rocking party music. Imagine life before Girls. Then, Girls entered the scene. Life became more complicated but also happier, more colorful, fun. Imagine Ernville, a generic sounding band with a generic sounding name. Then, Saab and Candy entered the scene. And then we got Cheats, probably the most exciting 7-piece band of the 2010s. And this debut, probably the greatest thing since pizza came sliced (“Newspaper Girl”, “Summer”, “Headfoam”). It’s meaty, tasty, maybe a few pineapple bits in there (depends on your tolerance for the Hawaiian variety—me I like ’em fine) but HOLY MOZZARELLA! it’s bursting with cheese! Heat this up in the oven whenever you’re “Drunk”, feel like a loser (“Acumen”), wish to take a day off and just sleep (“Sleepist”) or want to call out the animal inside of you (“Accidents”). A

Pelota Court | Maude | 2014
“Great for chill-out kind of road trip in the car with the windows rolled down” probably speaks of this album’s limited appeal—not good enough for singing along while/or washing dishes or doing the laundry—except maybe when you’re not really paying attention to it and thinking about the monthly bills. Or maybe this is supposed to be unobtrusive music for undistracted driving. Or maybe not. The stories are there. It’s just that the songs and the hooks aren’t there yet (“Takda”). B-

Aurora | Maude | 2018
Maybe it’s this: Maude’s supposed Manila Sound-inspired pop-rock is just a little too clean a little too straight for me. The good news is, it’s better than the first. Sometimes it’s the stories (“Lagnat”, “Baso”), sometimes it’s the songs (“Brownout”, “Will”). Sometimes it’s just chill-out unobtrusive music for undistracted browsing. Sure, theatrics could could get tiring in no time  (i.e., December Avenue). But so is unimpassioned storysinging—especially if your usual M.O. is embitterment. True stories, fiction, or both, don’t just tell ’em. You also have to give ’em the feels. B

Langit Mong Bughaw | December Avenue | 2019
Is it just me, or the album cover of December Avenue’s Langit Mong Bughaw really looks like that of a worship album—or worse, songs for funeral services? Listen to “Intro” and tell me if it doesn’t feel like riding really slow and heavenly and cold at the same time. It may surprise some that this band has been around for more than a decade already. It took them five years to release their debut, which houses the lone Tagalog title “Eroplanong Papel”, which I deservedly dismissed—it’s not Sugarfree nor Typecast nor Silent Sanctuary (ca. Fuchsiang Pag-ibig). A competent emo-pop bar band, nothing more. Decent musicians, you’d wish they invest more on the songs than whatever tricks they have up their sleeves. Then, they actually did. Invest on the writing that is. And like the boy-best friend who’s always there, the less popular girl who got ditched for the prom queen, or the nerdy teen you never gave a chance, the band just move along until they finally find their darling listeners. Not the third gen emo crowd but YouTube/Spotify/WishFM one. “Kung ‘Di Rin Lang Ikaw” may be their most viewed hit but my vote goes to the song they released in 2017. And while I prefer the alternate title over the official one, I’m relieved that with YouTube/Google, no one’s going to get lost looking for “Hanggang Sa Dulo Ng Walang Hanggan”. So, you take it all, cheesy title included and immerse yourself in love/pain/whatever. Maybe someday, you’ll get sick of it all and finally learn to let go. This could definitely use a little more variation, something light, different (e.g., “Pink 5ive”, “Summer Song”), otherwise this would be of little use once you’ve finally moved on. B