Everybody Seems to Hate ‘The Predator’

I’m not totally sure about this, but Shane Black being attached to write and direct The Predator probably created a lot of buzz. Fans probably had high hopes for a good sequel/soft reboot. Fox probably dreamt of a franchise (re)starter. Black has that Iron Man 3 magic in him. One controversy, a handful re-shoots, and studio wrangling later, all the buzz turned into negative hype. The Predator flopped and got mixed to negative reactions, with reviews pointing out the re-shoots, the haphazard editing, the script’s outdated perspective on autism and overabundance of jokes hurting the movie. Heck, one review even complained the movie being a full action-comedy. (Talking about this review from Vulture, which complains that “the jokes aren’t evenly spaced.” Now that’s funny!) Why can’t a Predator movie be an action-horror-comedy?

Mind you, I was far removed from all of these—the hype and negativity—when I first saw the movie. I watched the movie again after reading stories about its troubled production and the generally negative reviews. And you know what, both times I find The Predator to be a mildly amusing fairly entertaining competently-made action movie, a fun diversion from all the Marvel and DC kiddie stuff, the high-octane but mostly CGI headache-inducing Fast & Furious movies (except, maybe, the new Hobbs & Shaw) and everything in between.

Yes, the jokes come aplenty. And Black sketched out his characters, especially the Loonies through jokes and quirks. They are a bunch of rejects, mentally unstable soldiers, each with their own quirks. Nebraska is suicidal, Nettles, a Bible nut, etc. Baxley (Thomas Jane) has Tourette’s, to the constant amusement of his bosom buddy Coyle (Keegan-Michael Key), whose jokes about Baxley’s mother are so offensive and juvenile they’re not even funny (which, I guess, is the point, they’re supposed to be offensive, not funny). At one point, Quinn McKenna (Boyd Holbrook) asks Nebraska (Trevante Rhodes) if it’s OK to leave an unconscious woman (scientist Casey Bracket played by Olivia Munn) alone with the rest of the Loonies and Nebraska assures him that she’s safe with them. And what follows is a quite amusing exchange between Casey and the Loonies that some people may find un-PC, not woke, and maybe, anti-feminist. I’m talking about a scene where Munn’s character grabs a shotgun and pulls the trigger on McKenna, and later, Baxley blurted out “eat your pussy.” 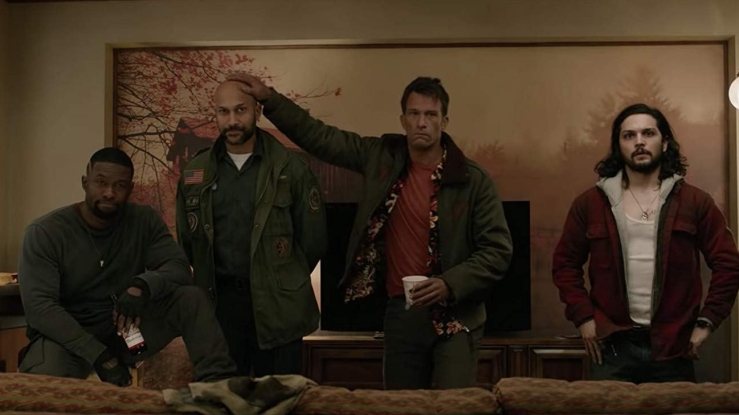 One may also wonder why a secret government organization dealing with aliens would call on a civilian scientist like Bracket. Why get an outsider? I guess she’s called in, just because. But then, I don’t really care. In a movie with mostly male characters? Ms. Munn’s presence is definitely most welcome. That is, she may be half as convincing as a scientist but she does well enough during the fights scenes, which is, practically the rest of the movie. Yes, that’s bonkers, I agree. But you practically forget she’s a scientist the moment she chased the predator with a tranquilizer gun. And you think that she definitely wanted a piece of that Predator and she clearly wanted it alive despite the fact that it leaves a pool of dead people in and out of the lab after it was suddenly awaken.

At the very least, Black wrote characters that leaves impressions on screen. Not necessarily fully realized characters, but distinguishable characters, some more memorable than others. Character motivations aren’t always clearly spelled (i.e., Casey staying with Quinn and the Loonies, Will Traeger’s obsession with space aliens) but in a Predator movie, what bigger motivation could there be than survival? So, Casey, Quinn, Nebraska and rest of the Loonies (reluctantly at first) banded together to protect Quinn’s son Rory (Jacob Tremblay) against the Predator and movie’s human antagonist, government bigwig Will Traeger (scene-stealing Sterling K. Brown).

And the action? The action scenes come fast and they’re staged clearly and coherently shot and edited. That’s more than one can ask for nowadays. There’s unconvincing CGI Predator dogs, but I like how Black turned one lobotomized dog into plot device later in the movie. And there are a number of crazy cool scenes that surely pleased the 16-year old-R-rated-brutal-violent-action-movie-fan in me. There’s blood from a hanging mutilated corpse dripping on an incapacitated Predator lying underneath, revealing its ugly face to McKenna. There’s the hilariously violent scene where Rory goes for trick or treat in a Predator costume (using actual Predator helmet and gauntlet) and accidentally shoots a bully. The final shootout in the forest? Will Traeger’s comeuppance? All right up my alley. The gory splatter-fest promise of Predator movies, which wouldn’t work for me if Black and Dekker’s characters were just bland, forgettable or not funny.

So, what’s not to like? The premise that Predators are taking human DNA to upgrade themselves is dumb. Sure, I’d agree with that. But wasn’t Thanos gathering magic stones to wipe out half the universe population, because, resources, just as dumb? Okay, Black’s Predator’s probably dumber. But if you think about it, there really isn’t much plot in the original movie. The Predator hunting people, warriors, soldiers for sports? Do we really need another movie built on that? Oh, yeah, we had Predators (2010), which was fun, if ultimately predictable. Complaints about the movie’s outdated views on autism and Black’s limited roles for female characters are all quite valid. Add to that the crude humor, and one could say that Black and Dekker’s script is deeply ingrained in ’80s action filmmaking with PTSD taken as substitute for machismo and jingoism supposedly subverted in the 1987 original. 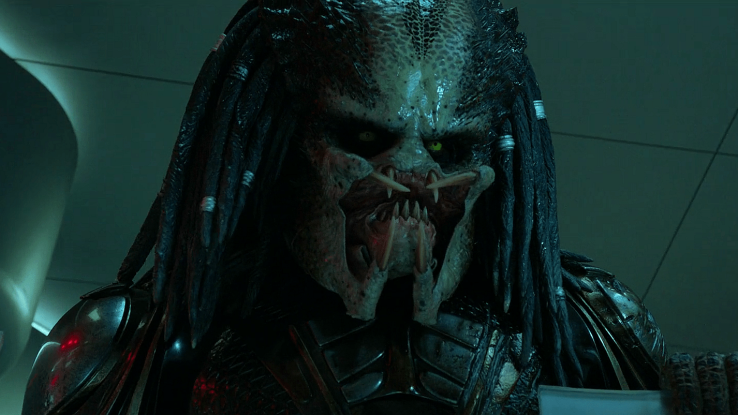 Is the editing that bad? Did the re-shoots ruined it? Well, there are some missing plot details here and there (e.g., how did they get that RV), none of which are big enough for one to not make sense of the whole thing. And there are enough slow and quite moments for the script to establish its characters before it proceeds with the nastier bits in the third act.

So, if you’d ask me, The Predator isn’t as bad as the negative reviews would have you believe. Having no pre-established expectations, I’d say the movie is pretty okay. But I get it now, why The Predator is the most hated horror/action movie of 2018. Black and Co. messed up with the franchise’s established norms. The Predator is a deviant.

If there’s one thing to learn here, it’s that you don’t mess with the fans’ expectations, don’t mess with the tone, the established “whatever” of a franchise. Most fans came in expecting a suspenseful horror action movie. Most of them were thrown off and disengaged early on when it turns out to be an R-rated comedy.