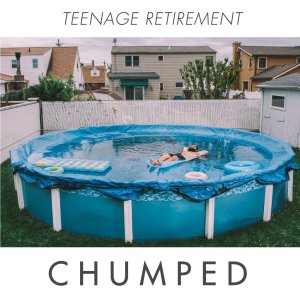 Chumped’s Teenage Retirement is for the young and restless, even the young at heart, those who dance to punk, power pop, anything with fuzz as long as its fast, melodic, those who love getting drunk with friends, talk about their “shitty” lives, teenage woes. It’s an unhealthy mix of broken hearts, drunken nights, wasted time, melodic punk and emo. Perfect picture of bad health, according to one Green Day song. They may sound a bit like Paramore but they take much much more from their heroes—among them Weezer and Superchunk—more than they do second-hand post-hardcore stuff. And no, Anika Pyle doesn’t agonize and yells as much as Hayley girl does. And while Superchunk and Weezer may be their heroes, I guess this all goes back to Boston—Massachusetts, not the band (i.e., More Than A Feeling). Because every time I play “December…” I can’t help but hear Joey Santiago and Kim Deal. And whether it transcends emo-punk or not, “The Pains of Being…” with its sparse lyrics (We get older / Time moves faster / You stay the same) and intertwining guitars that echoes both Pavement and Built To Spill, is probably the album’s most repeat-worthy track. And it breaks my heart that they’ve already called it quits, in same way that my 16 year-old self bleeds a little bit every time she sings “I’m looking at you / You’re looking through me / I would wait for you all summer long and / you would turn me away.” I, WE all know how that feels.