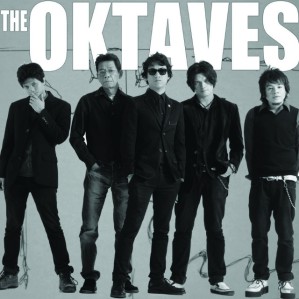 Not quite as dismal as the last collaboration album with Ely Buendia’s name on it. But not quite as good as Pupil’s (or Hilera’s) last album either. In case anyone’s forgotten already, The Oktaves is Ely Buendia’s kind-of-full-time-but-not-really other band, a supergroup who don’t seem to hang out together. Or maybe they do hang out, only not as much as the members of Sandwich and Pedicab.

The best cut on this otherwise solidly bland album, is the alternate take or mix of “Bungo Sa Bangin,” previously released on RockEd’s Rock Rizal. The old version has Pepe Smith working the frets, the new version features Nitoy Adriano on slides. “Walang Magawa” is probably Chris Padilla’s worst song yet. The song is self-referential, an uninspired song about being uninspired. Yes, anyone can play guitar, sing all day and produce nothing of substance. The only difference between Chris Padilla and the rest of us, is, he thought it was a good idea to commit it to tape.

“Langit Express,” would have been perfect for Tikoy Aguiluz’ Biyaheng Langit, only a decade late? And by a band formed out of producing the theme for the neo-noir Asiong Salonga movie, which Aguiluz helmed and disowned afterwards? Probably not coincidence. “Ikot Ikot,” not to be confused with the similarly forgettable Sarah Geronimo hit, may be Padilla’s best song here, but is memorable mainly for Ellen Adarna. The latest John Lloyd Cruz gossips notwithstanding.

Some people said “Papunta Ka Pa Lang, Pabalik Na Ako” brings back the Ely Buendia of the old, in that it sounds more Eheads than Pupil. Those people need to rid of their nostalgia blinders, the song doesn’t sound Eheads at all. “1995,” that’s what Eheads sounded like and this one, this one doesn’t. Nostalgic lang kayo masyado.

With “Kupal,” Ely Buendia seems to channel a cross between Dylan and Elvis. As a rock figure, Buendia ages linearly, unlike the ever shape-shifting Rico Blanco. “Kupal,” however strong in its title, is a disappointing faux middle class hippie rant—directed to middle class hippies. It’s a song Pepe Smith would approved of and make Bobby Balingit roll his eyes.

The Oktaves’ self-titled debut wears its rock n’ roll heart patch on its leather jacket sleeves. But said leather jacket isn’t scored from Ukay-ukay but from the mall and its ripped Levi’s jeans is ripped in the factory, not ripped and torn at home, DIY, using whatever tool available (a friend said hacksaw works best). Much worse, they may be company sponsored.

There’s not enough slant or riot here. What we get is manufactured-sounding rock n’ roll with matching manufactured rock n’ roll looks, from the slick hair pomade down to the shiny leather boots.