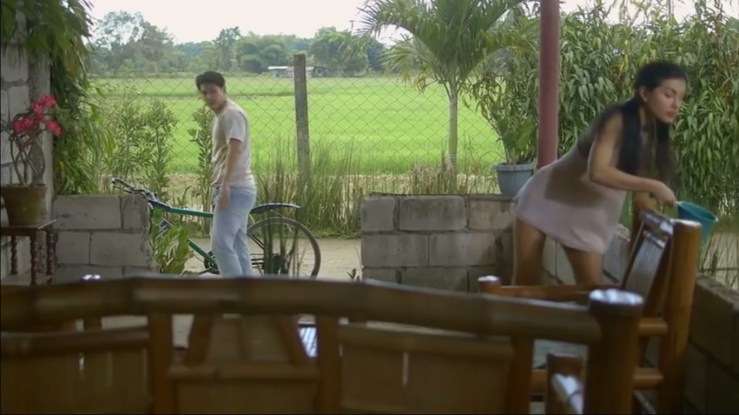 There are only two good things in Joel Lamangan’s Siphayo (Dismay): one of them is the subplot about shopping malls killing small business establishments and the conversion agricultural lands into commercial centers. The movie opens with a terminally-ill Fely coming home from the hospital with her husband Dante and their two sons. On the way home, they stop by the rice-fields and she tells his two sons to help their father till the fields and never ever let go of their land—even if it means a whole lot of money if the mall owners would buy their property.

Conrado, the eldest son, slaves in his father’s rice mill while his wife Sol cleans and cooks for them. Conrado wanted to work abroad, but decided to stay after he fell victim to illegal recruitment. Roland, the younger son, is soon to graduate from college and has no interest in dirtying up his hands. One day, Dante brought home Alice, a young pretty nurse—not to look after Fely, who died few days prior, but to take care of Dante’s nightly business. Yes, she’s the same nurse he brought home earlier and took care of his dying wife one day before she died. Conrado’s outraged and plots to roust Alice. Sol on the other hand, is just happy she could finally work in the nearby mall while Alice stays at home to do the chores. Roland, who’s made to look like a hulking hunk in a high school uniform earlier and an idiot for the most of the movie, is just happy to be complicit in his brother’s plan.

The movie’s overall clunky, with Sol the most grounded character in the story. Sol’s character, like the aforementioned subplot about shopping malls, adds something of interest to this overly familiar story. But it’s lost as the movie tries too hard to be an erotic-thriller and ends up mostly devoid of thrills.

This cuts the movie further down to its erotic elements. And it might have been better, had the movie dropped the “thriller” part and just focused on the family drama and in the bed department. Because as Nathalie Hart’s first big movie, it is a bit disappointing. Because Elora Espano’s lone bed scene packs more heat than all of Nathalie Hart’s nude scenes. Simply, Sol felt more like a real person compared to Hart, whose mestiza looks, big boobs, and thin frame, weren’t enough to compensate for Alice’s paper-thin character. Still, the movie would have been OK. If only the final act isn’t so silly and trying-hard to put the “thriller” in erotic-thriller. It could have been an erotic-drama instead, but without the laughably contrived ending—which just feels weird, unnatural—like a well-endowed pair, made of silicone pudding.